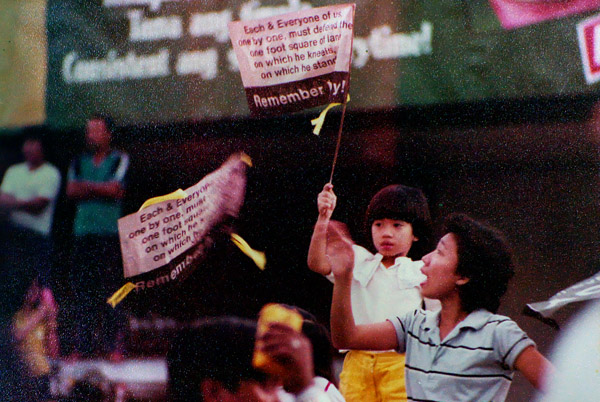 I planned to meet Cory Aquino's funeral cortege in the intersection of Epipanio de los Santos Ave (EDSA) and South Luzon Expressway (SLEX). I parked my car in my brother's house in Makati and waited for the appropriate time walk over to the intersection. My brother (Noel) and I, along with his wife and a friend, went together; they were shooting video. It quietly dawned on me, with a little prodding from by brother, that we were together in 1983 to meet Ninoy Aquino's funeral cortege in the same place.

Ninoy's funeral was witnessed by approximately 2 million while Cory's had around 300,000; it was raining badly on Cory's, of course, and many had the benefit of the media covering it thus had the alternative of staying at home to watch it on TV. Ninoy's funeral was totally ignored by the media controlled by then dictator Ferdinand Marcos and may have forced people out onto the streets.

It was both witnessing and celebrating history: what happened in the mid-1980s in the Philippines was one of the first of the 'revolutions' that would repeat itself in Poland, Korea and the other Eastern European countries.
Photo Story Photography