The Economics of Attention 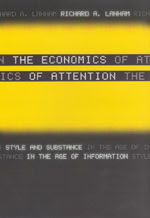 I picked up a book, The Economics of Attention by Richard Langham because its title and review grabbed my attention—so to speak. The book itself is a study of the historical development of style in communication and how that is used in media and advertising; the style and substance deal. Trends in art and the philosophical undercurrents behind it are surveyed and reviewed (more in the link above).

As a student of communication and social psychology, some appears to be obvious issues that have dominated many industries: banking for one—the use of efficient accountants over and against ‘pretty’ tellers, or the news media, which went through their own angst between using knowledgeable anchors to ‘talking heads.’ Which led me to consider this issue in the internet age and how; in particular, to modern Christianity where it is not too obvious.

Consider how you may have found this blog (assuming you searched for it). Was it even in the first page of the results page when Google retrieved it (this blog is sitting on Blogspot.com which is a Google product)? What determines, say a search for ‘Jesus Christ’ results in a series of websites about the Lord—who or what determines that such webpage end up on top of the list?

For the technically inclined, there is such a thing called ‘search engine optimization’ (SEO) which includes tweaks and tricks to help your website up the list. Simply, how to get the attention of Google and other search engines (and make it easy for them to classify or rank your site). The substance of a site may ultimately have nothing to do with it being on top of such a list—say a search for ‘Jesus Christ’—but the ability to manage getting the attention of Google.

It may point to a not too obvious trend which modern Christianity may already be wallowing in: a post-modernist scenario where truth is no longer determined by substance (in this case ‘sound biblical teaching’) but by the economics of attention. I taught for over 20 years in a bible college where through blood, sweat and tears I experienced the struggle of wrestling with students about substantial theological issues only to find them after being swayed by the latest media driven hype of a fad. A split level form of Christianity has evolved where there is an academic world where issues are realistically considered to a ‘real’ world Christianity driven and fed by a Christian version of show business.

Consider me a sour grape because I categorically came from the Christian academe, but if it is not too obvious, purveyors of truth are no longer the theologians but people from show business. Consider how wisdom from a movie personality born again yesterday becomes a best seller overnight. People are drawn to those who grabs attention and not to those who are really knowledgeable but boring.

Wisdom has now been reduced to slick sound bites (consider the difference between Proverbs and Ecclesiastes) as spirituality is now driven by lust (which feeds boredom) and not by a desire to know The Way and the Truth. For the last two two thousand years, the absence of Power Point did not hinder the march of the Kingdom—yet the proclamation of the Gospel cannot seem to live without it now.

All these brings me back to life waiting on and for the Lord—an exercise in boredom.

Screensaver: The Marriage and Consummation (Part 2)


URBAN WAVES
The Mac’s mystique is partly because of Steve Jobs whose force of personality elevated him to be its high priest.  If Jobs was the high priest, someone had to be the evangelist.  In the 1980s, Apple got Guy Kawasaki to be the Apple spokesman.  He was the definitive “Mac Evangelist”.  Although that title already existed before Kawasaki came on board Apple, his zeal for the Mac brought out its full meaning.  He actually studied in Billy Graham’s school of evangelism to learn techniques on how to convert people.  A professing Christian, Guy Kawasaki combined his knowledge of evangelism and marketing.

It’s an understatement to say that maybe that has to do with the cultic culture of the Mac community.  The internet is full of other groups where there are varying degrees of brand worship but the level of organization and passion among Mac users has made it a little bit more obvious.

So is this simply a copycat of religion?