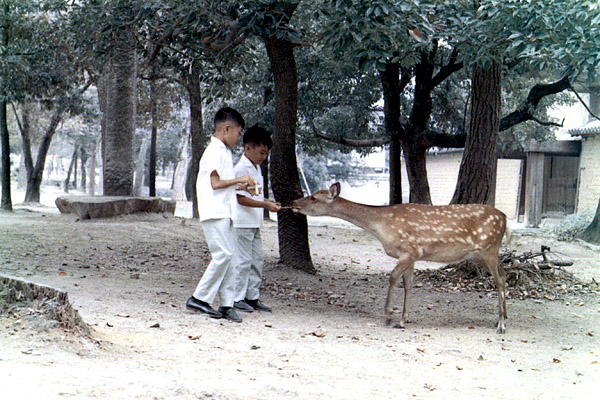 
The nice neat number of half a century bodes of half-full/half-empty comments like "life begins at 50" (...as in begins to what?!!!...) and so on.  For an anniversary amnesiac like myself, those neat numbers are helpful in remembering events like getting married in 1990 and having my daughter's and wife's birthday on the same day (my son did not make it

Today I look forward to holding a make-up class where we will spend most of the time in a darkroom making salt-paper prints.  Something that I have not done in quite a while but the smell of hypo does bring back pages in the past (high school and college).  Then the nice neat number reminds of another neat number: 10.

It was on my tenth birthday, while traveling with my dad in Hong Kong that a fortune cookie declared that I my dreams will come true;  A couple of days later, while visiting the Tōdai-ji temple in Nara, Japan, I managed to fit through the "Buddha's Nostrils" (a post with a hole cut through it).  It is said that whoever is able to squeeze through will have his wishes granted (or guaranteed eternal life; or receive enlightenment...whatever) and I was the only one in our party who did.  The most obvious and evident manifestation was that I received my first ever camera (an Olympus PEN-EE) later that same day.

Looking back forty years later, I can say that most of my dreams (and maybe a couple of nightmares) have come true.  Not bad—I guess—for someone who was not expected to live; being born with a congenital defect (harelip/cleft palate).
Reflection