Maybe All The Reason in the World

I have been thinking about my luxury of thinking about “half-reasons” which in turn brings to mind people stuck living out “half-reasons”.  Security guards for one: love them—hate them.  But right now am thinking of a couple of guys taking turns in shifts to watch over the compound where I live in—all for minimum wage (actually less since one absentee homeowner has not given their share for a couple of months now).  At least the odds of anything violent happening in our gated community minimizes the risk to their lives and limbs, other security guards in more hazardous situation virtually have to offer their lives for that same minimum wage (okay, to be fair, maybe there is some “hazardous duty” add-ons…).  Is that the life they wanted to live?  Is that the career they would have preferred?  Or, is it simply a case where society and circumstances have sentenced them to a life less than what is desired?

Exercising my luxury of being able to think about it, I have come full circle to something in the Bible that has been understated in the media driven Christianity that I keep bumping into.

“Therefore, stay awake, for you do not know on what day your Lord is coming.  But know this, that if the master of the house had known in what part of the night the thief was coming, he would have stayed awake and would not have let his house be broken into.  Therefore you also must be ready, for the Son of Man is coming at an hour you do not expect” (Matthew 24:42-44).

Now if only thieves would give a press release as to when they will come around then life becomes much simpler (oh wait…thieves in positions of power do give press releases, but I digress).  Masters of the house have other things to do than lose sleep waiting for a possible non-event and he can probably hire a watchman or a security guard.  If the security guard does his job well, the likelihood of a break in diminishes and actually makes the job boring.  It is when nothing is happening when the guards are likely to get bored and doze off.  What does it mean then to “be ready”?  Be paranoid and trigger happy?  One could end up shooting neighborhood cats and early morning joggers that way.

“Blessed is that servant whom his master will find so doing when he comes” (Matthew 24:46).

This servant has the role of the cook—nothing spectacular about him except that he did his job.  He is presented in contrast to a wicked servant or cook who took advantage of the absence and delay of the master and beats his fellow servants—he gets to be the punch line.  Now before you say that cooks can become a famous celebrity, note that Jesus describes this cook as one who is in-charge of the household and his fellow servants (as in the case of the wicked dude).  This guy was not a chef wannabee on his way to Food Network, he was just the dirty kitchen cook taking care of the other helpers in the household.  How meaningful is that?

In either case, Jesus makes the security guard and the cook the metaphor for what it means to be ready.  Inversely, in 1 Thessalonians 5:2, the thief is symbolically Jesus coming back.

So what has my luxury of thinking brought me to?  We learn from the security guards and the cooks what it means to be ready and faithful to the apparent “half-reasons”.  Life in the Spirit (or “life according to the Word” of God or “life in the Kingdom” or however else your tradition would say it) is to be lived out in those “half-reasons” no matter how boring they may be.

While many seek out the presence of God in the ecstatic and fulfilling (and given the way the modern church works that usually means looking onstage), Jesus calls us to wait for him in the mundane, the ordinary, and the boring. 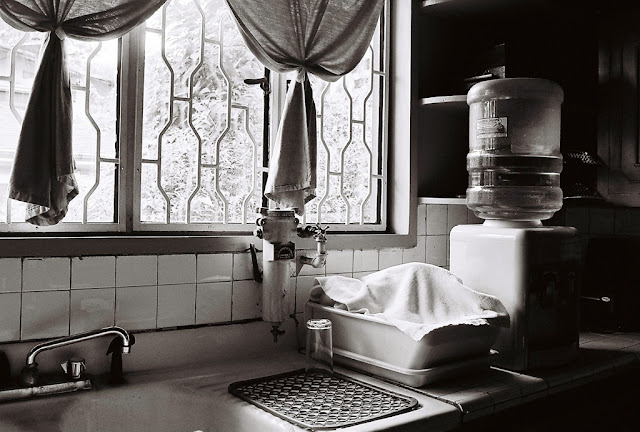