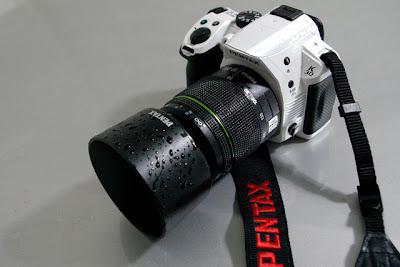 When the Pentax K-30 was announced with the specs similar to the K-5 (a tough act to follow) I assumed it would be similar to how the Pentax K10D would evolve into the Pentax K200D and the Pentax K-m.  Having owned a K10D I would definitely feel downgraded if I had to shift to either the K200D or the K-m even if the sensor and image quality is at par or even improved compared to the original camera.  Of course, that is merely a ‘feeling’ since I can readily ‘downgrade’ myself to use something with the feature set of an entry level camera as I would later with the Pentax K-x.  While there were reasons why I needed to use the K-x, with the K-5 as my main camera I wondered why I would even give the K-30 any attention.

The K-30 shares the same sensor of the K-5 (as well as the K-01) so I would assume that it would be about the same or even better in some respects to the older model; so I’m basically looking at the possibility that all that it has over the K-5 is that it looks rugged.

While the button layout is similar to the K-x/K-r, I was pleasantly surprised that it had dual user configurable dials; it had the AF-S/AF-C/MF dial similar to the K-5 not like the AF/MF slide switch of the K-r.  The viewfinder shared the same information set as the K-5: it has the graph that displays the exposure value not merely the numeric display of the lower model cameras.

My son likes it better than my K-5 because he says it does not disrupt his muscle memory when it comes to punching buttons so it becomes a clear upgrade for those used to the K-x/K-r.  But as word has it, the K-30 is not simply the latest entry level in line-up of Pentax.  As it stands now, ‘entry-level’ is occupied by the Pentax Q and the K-01; the Pentax K-30 is touted as mid-level model which may make the successor to the K-5 something really interesting.
Camera Stories Photography