on August 22, 2012
I have written off the K-01 for myself when I initially tried it but gave it a second look when my autistic daughter actually used it productively.  However, I still balked at having to actually buy one for her use considering that it is not likely she would be shooting full time—it would still have to be somehow useful for me the rest of the time.  Then a friend, Jay Javier picks up a Samsung NX200 and puts a Leica Imarect viewfinder on it and the light goes on.  Of course!  Only a rangefinder person would think of this!  And I had this Voigtländer 75mm viewfinder lurking somewhere.  Sometime ago, I had this whim that I would pick up a colored Voigtländer Bessa R2, so when a bargain for a finder came my way I thought it would make a great companion for a future lens.  The Bessa, however, was not on the top of my "to-buy" list and when Pentax came out with the Pentax K-x with various colors, the novelty died and the compulsion waned...but I still had the 75mm finder.

So there-I picked up the Pentax K-01 and with an old SMCP F 50/1.7 matched to the Voigtländer 75mm (yeah, for once the math of the crop factor blah makes sense) and began shooting with it: 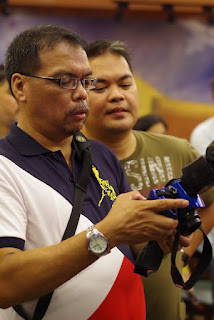 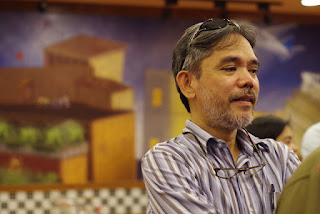 Because I did not have any exposure information in the viewfinder, the K-01 was set to program mode (and yeah—face detect).  So now I'm looking around for a 50mm viewfinder to match it with the SMCP DA L 35/2.4 AL (the default lens which Erika uses since she zooms with her feet). 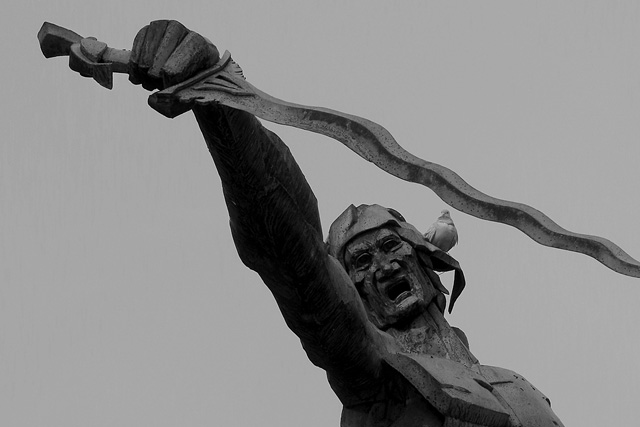 The photo above was shot vertically—originally to include the whole statue—but after the first couple of shots a bird landed, I wanted a tighter shot but did not want to lose the moment so I went ahead with this shot which was cropped to this orientation.
Camera Stories Photography